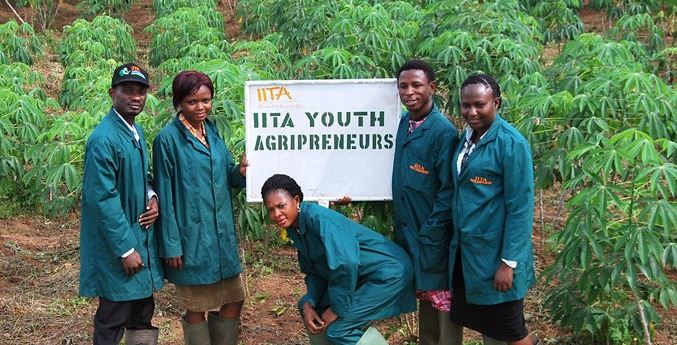 Ouagadougou – With the logo of his internet TV station on his black T-shirt, Inoussa Maiga energetically plucks corn stalks in northern Burkina Faso for a programme on farming in Africa.

Maiga, 30, launched Agribusiness TV in May in the Burkinabe capital Ouagadougou, determined to change poor opinions about agricultural work held by African youth and to help develop the continent.

“All those who went to school up to a certain level consider going back to the land as a failure, as something demeaning. Yet and we see it every day in our broadcasts, there are many opportunities for young people,” he says.

In Bagre, 245 kilometres (150 miles) north of the city, Maiga has found one of the unusual topics he likes to promote: a teacher who gives classes in maths while raising pigs and growing maize, rice and groundnuts.

Other characteristic subjects are a woman in Benin with a degree in banking and finance who works in a “man’s universe of crop production” and an inventor of helpful machines for agricultural cooperatives in Togo.

The TV channel, available on the web and mobile phones, has steadily garnered a network of correspondents in Benin, Cameroon, Ivory Coast, Mali and Togo, with Mauritius next on the agenda.

The editorial stance of Agribusiness TV has clear rules.

Features focus on people of “a maximum age of 40” who have a “pretty interesting” background in farming, stock-breeding and other “different links in the food chain”, Maiga explains.

Programmes can cover “food processing, green jobs, everything related to the environment and the business of sustainable agriculture”.

“We want people whose careers can inspire other people,” says the broadcaster, who set up the enterprise with his wife Nawsheen Hosenally.

Himself the son of a peasant farmer, Inoussa studied at the University of Ouagadougou, where he specialised in communications for development before founding Agribusiness TV.

He seeks “above all to showcase young Africans who are courageously committed to agriculture, who invest in the area, and possibly to bring a different outlook among young Africans to this sector,” he says, calling it “the motor for the development of African economies”.

“When you look at the economic structure of our countries, you see that it’s in agriculture where one can create the most jobs and fight massive youth unemployment,” adds Inoussa.

“We want to spotlight young people who are doing interesting things. We seek to motivate and encourage those who would like to start out in agriculture. May this inspire them!”

Inoussa’s work won support from the Technical Centre for Agricultural and Rural Cooperation (CTA), a joint institution of the African, Caribbean and Pacific (ACP) group of states and the European Union.

The CTA provided funding worth 58 000 euros ($65 000) to help launch Agribusiness TV. Inoussa came up with a further 65 000 euros from his own communications firm.

Hosenally also works full time on the channel. She translates material into English and deals with technical aspects of putting broadcasts online and managing social networks such as Facebook and Twitter.

The founders surpassed their aims during the first year, with 45 000 fans on Facebook and about 800 000 viewers for their broadcasts. The website is bilingual, full of videos and a blog.

But on a continent where internet access remains patchy, the founders of Agribusiness TV are happy to make their videos available to various associations to be shown in rural settings.

“We project videos ourselves when we’re invited to conferences or meetings with players in the rural world,” says Inoussa, who hopes that his channel will benefit from the gradual progress of the internet in Africa.

“Every day, at least 15 people get in touch with us asking for the contact details of such and such an entrepreneur to whom we devoted a video,” Hosenally says.

“We’re also encouraged by the messages and the comments we receive each day,” adds Inoussa.

“These are videos that inspire people, we get a lot of feedback from the entrepreneurs we meet. Some of them tell us about contracts they have signed thanks to our work.

“All this gives hope.”

Agribusiness TV is available in French and English on dedicated apps for smartphone at www.agribusinesstv.info.
Earn valuable CPD credits