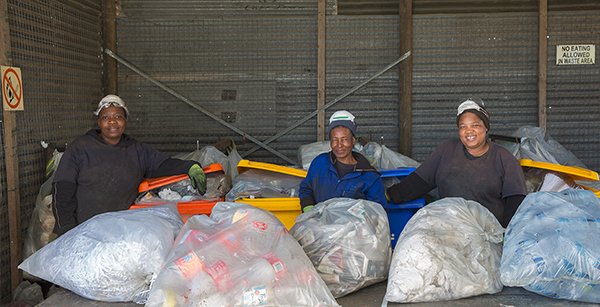 As the world’s waste generation surges and landfill availability gets increasingly stretched, a number of South African companies are taking waste reduction to heart.

World Bank figures show that South Africa produces almost 54 500 tons of waste a day, making it the 15th highest producer of waste in the world. It did, however, expect South Africa to fall, relatively, as other countries continued to grow faster.

Department of Environmental Affairs (DEA) baseline figures for 2012, the most recent local estimate, indicate that South Africa produces 108 million tons of waste a year, with the Western Cape generating 20% and Gauteng 45%. About 98 million tons go to the country’s 826 landfill sites. With estimates showing that a mere 10% of South Africa’s waste is recycled, there is a lot of room for South African companies to reduce their waste, helping to create a sustainable environment for generations to come.

While municipalities manage household waste, the management of big industrial and commercial waste is the responsibility of the companies that produce it.

Getting rid of waste is a significant industry in South Africa, with DEA estimates indicating R15 billion revenue and almost 30 000 jobs. Achieving the DEA’s target of recycling 20% by 2019 seems increasingly unlikely, particularly given the significant investment this would require by cash-strapped municipalities. One way around this is through public-private partnerships (PPPs), a model that several Western Cape municipalities are implementing. This has the potential to attract R1.3 billion and create 1 600 jobs in the next five years in that province.

“The available figures are not that recent and many are based on estimates, so it is unclear exactly how big South Africa’s waste problem is,” says Heidi Newton-King, Spier’s Director of Sustainability. “But, what we do know is that waste management is a growing problem and companies need to be innovative, investing time and money to play their role in addressing it.”

A waste economy report shows that four projects implemented nationally in 2016 attracted over R1 billion in investment and created 148 jobs in the waste sector.

There are numerous projects, including public-private partnerships, to get waste under control with several companies leading the way in waste management in South Africa.

“Changing perceptions around waste is critical if we want to find long term solutions,” Newton-King says. “Each section of the business sorts its waste individually, with waste storage and categories differing before it’s taken to the farm’s sorting facility and sorted a second time to make absolutely sure the waste can’t be recycled and to help us identify any new non-recyclable  items in the waste stream.”

Non-recyclable items are mostly multi-film packaging (such as coffee bags and tea sachets) as well as surgical gloves, hair nets and pot scrapers.

In 2007, Spier installed a pioneering centralised wastewater treatment plant, which recycles 100% of its wastewater. The cleaned water is then used to irrigate the garden and grounds and the busiest guest toilets.

In addition, its food and clothing which would otherwise go to waste, is donated.

SAB’s breweries re-use or recycle almost 90% of general waste. More than 80% of SAB beer is packaged in returnable glass bottles or cans and about 99% of spent grain from its breweries is re-used by farmers for animal feed or for renewable energy.

Waste water is used to produce fertiliser or energy and since 2008 it has cut water use per litre of beer by 28%.

“Technically zero is not about achieving zero waste to landfill as much as it is a whole-systems approach that aims for a change in the way materials flow through our business,” Newton-King says. “Our commitment to the final couple of percent means that we are consistently evaluating our purchasing decisions as new items are brought into the stream all the time.”

“With a driving force of minimising our impact on the environment, we believe staff training and education is critical to change perceptions about why recycling is important and the benefits of doing so both at work and at home,” she concludes.