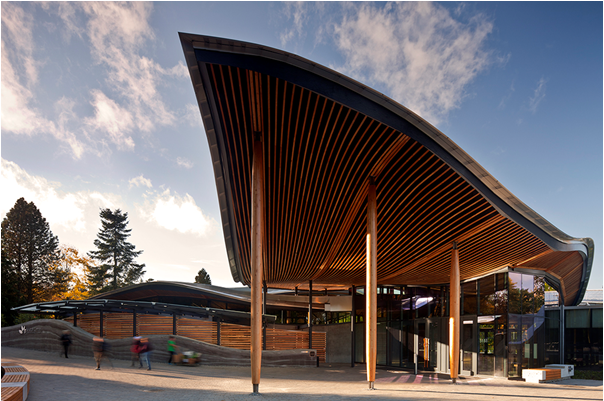 Inspired by organic forms and natural systems, the VanDusen Botanical Garden Visitor Centre in Vancouver seeks to create a harmonious balance between architecture and landscape from both a visual and an ecological perspective. Completed in 2011, this dynamic 1,765 sm single-story structure includes an innovative roof form that appears to float above the building’s curved rammed earth and concrete walls. Metaphorically representing undulating petals, the building form flows seamlessly into a central oculus and the surrounding landscape.

The building was designed to align with, and contribute to the Garden’s conservation mission. Through mapping and analyzing the Garden’s ecology, the project team successfully integrated natural and human systems, restoring biodiversity and ecological balance to the site.

The Visitor Centre recently achieved LEED Platinum certification, and is the first building in Canada to register for the Living Building Challenge (LBC). The LBC places enormous constraints on projects, such as requiring materials to be supplied locally/regionally and restricting Red List Materials like PVC. 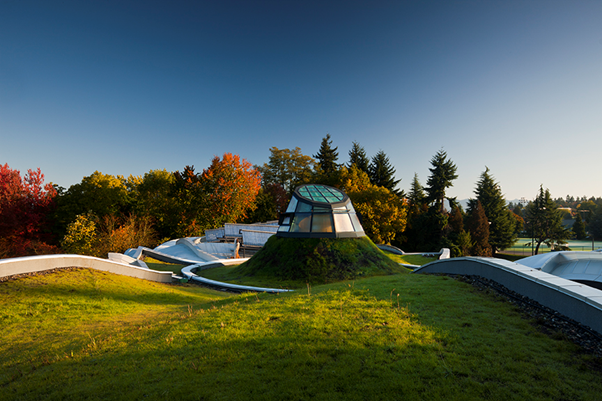 The Visitor Centre uses on-site renewable sources—geothermal boreholes, solar photovoltaics, solar hot water tubes—in conjunction with passive design strategies to achieve annual net-zero energy. With wood as the primary building material, enough carbon is sequestered to achieve carbon neutrality. Rainwater is filtered to provide the building’s greywater requirements; 100% of blackwater is treated by an on-site bioreactor—the first of its kind in Vancouver—and released into a new feature percolation field and garden. Natural ventilation is assisted by a solar chimney, composed of an operable glazed oculus and a perforated aluminum heatsink which converts the sun’s rays to convection energy. The solar chimney is located in the centre of the atrium and exactly at the centre of all the building’s various radiating geometry, highlighting the focal role of sustainability in form and function.