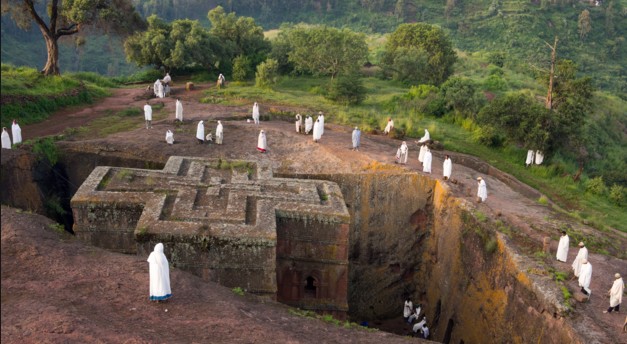 Addis Ababa — Despite a cultural, historical and linguistic identity quite distinct from the rest of Africa, Ethiopia never became a major tourist destination on the continent.

But Ethiopia didn’t appear that bothered or did much to help itself in promoting its treasure chest of tourism gems. Where other countries would proclaim their natural heritage, beckoning tourists to come, Ethiopia chose modesty and hidden beauty.

The 2013 formation of the Ethiopian Tourism Organization (ETO), however, signalled a break with this trend and the Ethiopian government decided to take tourism seriously as a means of generating huge revenue for the nation and eradicating poverty.

The ETO was given a mandate to “boost tourism destination development and marketing, and enhance the benefits of tourism in a sustainable and competitive manner.”

Then in August this year, the Ethiopian Culture and Tourism Ministry made a bold announcement of a target to triple foreign visitors to more than 2.5 million by 2020. The ultimate goal: Ethiopia featuring in Africa’s Top 5 tourist destinations by 2020.

“There are many reasons tourism took a back seat but the number one was getting the basic infrastructure in place,” Solomon Tadesse, ETO’s CEO, told IPS. “Now, the government can fully get behind it based on the economic growth of the last ten years, which has also created a good impression with the outside world.”

Tourism in Ethiopia generates 2.9 billion dollars for the economy annually, close to a million jobs and about 4.5 per cent of the GDP, according to the World Bank. That percentage, however, trails the likes of Rwanda’s 9 per cent of GDP, and tourism accounting for about 11 per cent of global GDP.

In 2013, Ethiopia’s tourism industry was ranked 120th globally and 17th in Africa by a travel and tourism competitive index compiled by the World Economic Forum.

But for the past decade an upward trend–admittedly starting from a low base–has seen visitor numbers to Ethiopia increasing by at least 10 percent a year. During the fiscal year 2014/2015, more than 750,000 tourists came to Ethiopia, according to the ministry.

“Key tourism factors such as easy and fast growing air access, personal safety and local hospitality, rapid economic growth and, above all, fascinating discoveries to be made bode very well for rapid tourism growth,” Mike Fabricius of the South African-based The Journey, a tourism consultancy and marketing company commissioned by Ethiopia’s tourism ministry to develop a national tourism brand and marketing strategy, told IPS.

And Ethiopia’s tourism industry is looking to foreign partnerships, said Tadesse, to help it achieve this by investing in the likes of hospitality training centres, developing new niches such as adventure tourism–paragliding, hot air ballooning, mountain biking, highland marathons and the like suited to Ethiopia’s diverse and rugged terrain–and expanding beyond the country’s well established northern Historical Circuit to other regions that haven’t traditionally featured on tourist itineraries.

“The government has learned that, OK, we have these industries, textiles, mining, energy, this and that–so why not have tourism as another,” Tadesse said. “We know we are behind our neighbours and need to run and catch up.”

But catching up with African tourist powerhouses such as Kenya and Tanzania will require “gargantuan efforts,” Derek Schuurman, an African travel specialist with UK-based Rainbow Tours, told IPS.

While others within Ethiopia’s tourism industry urge caution, arguing Ethiopia doesn’t need to think in terms of catching up, rather should embrace its own unique tourism development model, and that the numbers game misses the main point.

“We could become the number one destination on the continent though not only by tourist numbers but for quality of the experience and the uniqueness of the landscape,” Greta Iori, a conservation and tourism professional with five years’ experience in Mexico, South Africa and Ethiopia, where she grew up, told IPS.

Most of Ethiopia’s tourism treats–including nine UNESCO World Heritage sites–the most for an African country–are fragile and risk being destroyed by hordes of tourists, Iori notes.

Another concern is that too rapid an increase in tourists can also lead to cultural clashes between locals and foreigners, resentment toward tourism for benefiting only the elite few, segregation of local societies, spiralling prices, money grabbing locals and increased crime.

“Generally it’s up-market tourism that works seamlessly, with the cheaper end that gives problems, and at the moment Ethiopia does not know which way to go,” an individual involved in Ethiopian tourism for more than 10 years told IPS, adding that mass tourism for Ethiopia could put its “golden goose in the pot.”

This needs, they emphasise, to go beyond hotel investment and development to providing tourist information centres, well maintained public toilets, and official rest sites–providing the likes of restaurants, souvenir shops and medical centres–along major travel routes and around key tourism sites; common in other tourist destination countries but not so far absent in Ethiopia.

“Building infrastructure that meets the expectations of foreigners is key, as there is a limit to how much people are willing to rough it,” Greg Dorey, UK ambassador to Ethiopia, told IPS. “But the jury is out on whether it can build up the supporting infrastructure sufficiently well, given the huge obstacles it places in the way of foreign entrepreneurs investing in this sector–and foreign entrepreneurs, let’s face it, know better than most what foreign tourists want since their livelihood depends on understanding the requirement.”

For all the exciting projections and talk of transformative powers, tourism remains a fickle business–especially in Africa.

Just ask Kenya, which has seen tourist numbers decline since last year’s terrorist attacks and travel warnings issued by Western governments, resulting in deserted beaches and thousands of hotel rooms unoccupied. And when the Zimbabwean government announced in January a new 15 per cent tax on hotel accommodation for foreign tourists, the result was a slew of cancelations.

“This is a crucial learning point for Ethiopia,” lori said. “If we develop slowly and not at mass scale, the tourism industry will be more likely to cope with unexpected threats to tourist numbers and revenue, making it a long-term steady growth rather than a short-term gain. Rapid short-term development isn’t sustainable and has the ability to jeopardize the success and future of tourism for our nation altogether.”

Evidence suggests the Ethiopian government is at least trying to bring brains to bear in how to tackle the numbers conundrum. In addition to ETO, 2013 saw the formation of the Tourism Transformation Council, chaired by Prime Minister Hailemariam Desalegn himself, and the Tourism Board to monitor the running of ETO.

“We’re starting from ground zero, though that’s not a weakness rather an advantage as we have learned from others’ mistakes,” Tadesse said.

Therein probably lies Ethiopian tourism’s greatest strength–there are still so many diverse cultures, landscapes and wildlife to be developed for tourist itineraries: the Simien and Bale Mountains; the forests of the South; the Sof Omar Caves; the Danakil Desert location of Lucy, the oldest and most complete hominid skeleton ever found, lending weight to Ethiopia’s claim as the cradle of humanity.

“This is the land of origins, here you get original human beings – you don’t get an artificial smile, you get an original smile,” Tadesse said. “Make it your travel destination and you’ll never be quite the same again. See you in Ethiopia.”