According to the World Green Building Council the construction sector accounts for up to 40% of waste in landfill sites worldwide, and while this figure may be lower in South Africa construction remains a significant contributor to landfill content. The National Waste Information Baseline Report (DEA2012) indicates that the construction sector is responsible for 8% of all waste generated, although it is unclear whether this number includes the waste from product suppliers during production, which is significant. Importantly this statistic also excludes the ongoing operational waste generated in all occupied buildings, and so is understated.

Construction waste is made up of aggregates (concrete, stones, bricks) and soils, wood, metals, glass, biodegradable waste, plastic, insulation and gypsum based materials, paper and cardboard, a very high percentage of which are reusable or recyclable if separated at source. Currently 16% of construction waste is recycled in South Africa (NWIBR).

Trends and forces for change

The green building movement is being spearheaded by the CSIR and the Green Building Council of South Africa, the latter having set up rating tools that award points for, amongst other green building aspects, resource efficiency for designs which reduce waste.

Construction waste emanates due in some part to inconsiderate design, construction, maintenance, renovation and demolition, as well as supplier considerations such as packaging. Intelligent design and best practices during each phase can significantly reduce waste.

Architects and engineers have a very significant opportunity to affect the waste generated through the life cycle of a building by determining the method of construction and the materials specified. From simple strategies like utilising building rubble onsite as fill for instance, or reusing items from demolished buildings such as wooden window frames, by specifying materials with recycled content, and adopting strategies and building methods geared to dismantling and designed for deconstruction – design affects everything, and with careful planning and consideration given to waste and reusing materials at concept stage, much waste to landfill can be avoided. An example of this is modular construction. 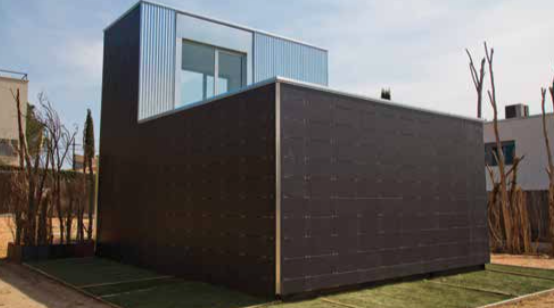 It is also very important at design stage to consider how the building is going to manage operational waste while the building is occupied – sufficient space will be required for recycling storage and sorting, as well as the access to various floors and of course for collection.

At a waste management level, there are a number of best practices to ensure maximum recyclability of materials on site:

Product and Material Suppliers suppliers have huge potential to reduce the amount of waste going to landfill. Many suppliers could provide their materials to site in a way that requires less or no ‘packaging’, or packaging that is recyclable, and also ensure that their contract with the construction contractors is such that their packaging is returned to them directly for recycling or reuse. ‘Packaging’ is a significant waste source. (Packaging refers to anything that is not the actual material that will be used and left installed on site.) Besides the ‘packaging’ referred to, the product suppliers are also responsible for a significant amount of waste at their own factory or storage houses – the contractors and design team can have a significant influence on the downstream waste impacts by contracting only with suppliers that minimise their waste production and maximise recycling and reuse of waste.

The building in operation

During the course of a buildings life it will require multiple new light bulbs, new carpets and flooring, painting, filling, stripping, windows due to breakages etc. Good building managers and operators can make the necessary effort to separate materials.

The Green Star SA rating tools will reward designers for making provision for separation operations within the utilities area of the building, and building maintenance would utilise these facilities for its waste streams. It is important to have both the space designed to store and sort the waste for collection, but also to have waste management policies in place for the ongoing operation while the building is occupied.

As the market places a greater value on sustainability, products with recyclable content become more sought after. Masonry bricks made from crushed aggregates, tiles made from recycled plastics, are just two examples of products gaining traction.

On the waste disposal side, costs are rising but it remains relatively cheap to dispose of construction waste to landfill, cheaper in fact than general waste disposal which costs R272.00 per ton.

The construction sector has a massive impact and a commensurate opportunity to effect positive and meaningful change. Through a combination of product design and innovation, building design and methods, and through best practice waste management on site the sector can radically reduce the amount of waste created and significantly improve on the rate of recycling.

Nkhahle, who is also a founding director of the GBCSA, takes over the reins from long-time Chairman Bruce Kerswill, who played a leading role in the formation of the council.

The GBCSA was established in 2007 to promote green building development in the country. It is a member of the World Green Building Council (World GBC) and is today one of the most active councils worldwide.

Nkhahle is an Executive Director at SALGA, responsible for ‘Corporate Strategy and Research’. Prior to this he was the Executive Manager and National Programmes Co-ordinator at the South African Cities Network from 2005 to 2009.

In both these roles he facilitated partnerships and support to selected municipalities to improve sustainability in their operations with particular emphasis on energy, water and land use management. Up to 2005, he was a managing Partner at Syn-Consult Africa, a consulting firm focusing mostly on sustainability on the built environment. Nkhahle is one of the founding members of the GBCSA board thus bringing institutional memory of the organisation and some important insights into the industry.

Nkhahle holds a Bsc (Hons) Town and Regional Planning from Wits University. In 2004 Nkhahle received a recognition award issued jointly by the Swiss Federal Institute of Technology and the Holcim Foundation for Sustainable Construction. This was awarded for a toolkit he developed for assessing sustainability of housing projects. The toolkit formed the basis from which he was able to contribute towards the development of GBCSA’s rating tools.

GBCSA CEO, Brian Wilkinson, comments: “We are happy to welcome Seana Nkhahle on board as the council’s new Chairman. He brings with him extensive experience in terms of sustainability knowledge in his academic work as well as the work he has done in consulting and in local government.

Wilkinson praised the efforts of Kerswill in founding the council and his passion and commitment to creating awareness and promoting green building and sustainable development in South Africa.

“Kerswill is one of the country’s leading green building advocates and has helped put South Africa on the international map in terms of embracing green building, through the establishment of the GBCSA. He has gone on to become the chairperson of the World GBC and his leadership in transforming the building industry towards green is noteworthy. We thank Kerswill for his incredible work and know that he will continue to play a role in green building locally and internationally,” says Kerswill.

Commenting on his appointment, Nkhahle says he is looking forward to the opportunity of heading the board of the GBCSA and playing a meaningful role in transforming the building industry towards a greener future. He believes that enhancing sustainability in the built environment and urban development will enhance efficiency in South African towns and cities as well as those on the rest of the continent.

“I want to draw on my experience in sustainable urban development and local government in taking the GBCSA into the next phase of its journey. The council is at an important chapter, where green building is gradually gaining momentum. People, private companies and government are realising that managing climate change is becoming increasingly important and that green building is a crucial element to this effect.

An important milestone in the green building industry and a departure from previous debate is that while green building is crucial for climate change mitigation, it is equally important for financial purposes as green buildings yield better economic returns while at the same time improved liveability bodes well socially”.

The new chairperson’s goals are to consolidate the solid foundation that has been built by his predecessor and to enhance the scope and reach of the council. This includes ensuring that more commercial buildings are supported to achieve good ratings thus building on the momentum already seen in this category. Existing buildings which has the biggest building stock will also be a key target. Nkhahle anticipates supporting government and municipalities in particular to play a bigger role in facilitating sustainability in their respective built environments.