A cartoon image that went viral on Facebook depicted South Africa as the third best solar location globally. How on earth do you measure and rank that?

If even dim-witted cartoon character Homer Simpson thinks it’s a bad idea for South Africa to build another nuclear power station – when the country is the “third best solar location in the world” – then why is the country’s government pursuing it?

Environmental campaigning organisation Greenpeace Africa argued this by posting an image of Homer Simpson hitting his forehead with his hand on its Facebook page to encourage followers to sign an anti-nuclear petition.

“Do you also feel a #facepalm moment coming on when you think of South Africa’s crazy #nuclear plans?” the caption read. Nearly 13,000 followers had shared the picture in the last month.

But how does one rank countries according to solar location? And is South Africa indeed in third place? 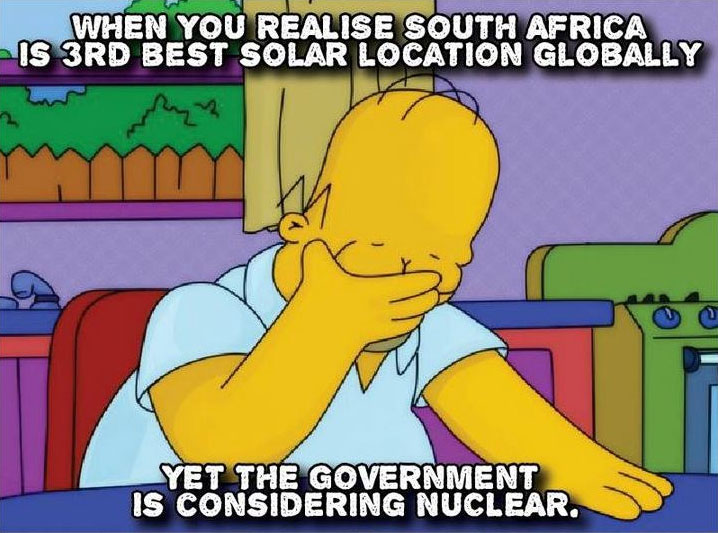 Greenpeace Africa’s statement “relates to South Africa as a location for solar power investments, rather than as the third best location for solar production in the world”, Melita Steele, senior climate and energy campaign manager, told Africa Check

She said their data was sourced from the quarterly Ernst & Young’s Renewable Energy Country Index. Steele acknowledged their statement was “slightly inaccurate” as they didn’t distinguish between the two main solar technologies.

For solar photovoltaic technology – the kind that is used in solar panels to convert sunlight into electricity – South Africa was ranked seventh out of 40 countries in terms of “investment attractiveness”. South Africa was third on the ranking for concentrated solar power (CSP).

Concentrated solar power uses mirrors to reflect sunlight onto a small area, harnessing the heat to either power turbines and generate electricity immediately, or to be stored in molten salt solutions and released during peak electricity demand.

This is measured by how much sunlight hits an area head on, a term called direct normal irradiation (DNI).

However, Africa Check discovered that Ernst & Young had released their most recent index on 16 September, whereas Greenpeace’s post went out on 25 August.

Before the September report, South Africa had never ranked higher than fourth for concentrated solar power. (Note: At the time of publication Greenpeace had not explained why this is so. We will update the report if they do.)

Furthermore, Ernst & Young won’t reveal what exactly they take into account to rate the 15 parameters making up their index, which includes political and economic stability, investor climate and the cost and availability of finance, on top of natural solar resource.

The index’s editor, Klair White, told Africa Check: “These rankings are based on many factors and data sets… However, we are unable to disclose further details on the specific methodology given its commercial sensitivity.”

The report also doesn’t explain the choice of countries included. Missing from the index are countries with some of the highest concentrations of irradiation in the world, such as Namibia, Bolivia and Argentina.

The former head of the Solar Thermal Energy Research Group at Stellenbosch University, Paul Gauché, told Africa Check: “Chile has the best solar resource by a mile… South Africa, on average, is also one of the best countries. I can’t say however that South Africa is specifically second or third, etcetera.”

The area between Springbok and Pofadder and around Sutherland in South Africa’s Northern Cape province are the best places for concentrated solar power in South Africa, he explained.

Gauché, now head of a concentrated solar power pilot project called Helio100, said the problem with ranking country irradiation values “is that irradiation ranges over a country, so it is hard to define.

It isn’t worth defining an irradiation ranking, rather look at the good irradiation in a country or region and see what value it offers for concentrated solar power.”

“If the country is short on capacity and running diesel generators and the sun is good, then the value of concentrated solar power is so much higher.”

The head of the solar thermal power plants and high temperature group at the Fraunhofer Institute in Germany provided similar comment.

Thomas Fluri told Africa Check: “It is difficult to make a meaningful exact ranking. You can say [South Africa] is one of the countries with the highest irradiation… If you want to make a precise ranking, there is not that much value to it.”

Similarly, “solely looking at irradiation does not make sense. The performance of the [concentrated solar power] plant is not only dependent on the irradiation.”

Concentrated solar power plants need to be close to electricity transmission lines and located on a relatively flat area where the vegetation is not under threat and that also has a suitable land use profile – in addition to getting sufficient sunshine, wrote Fluri, a postdoctoral researcher at Stellenbosch University at the time, in a 2008 academic article.

Using these criteria, Fluri found areas around the country that could yield a total 547.6 GW in electricity, which is an order of magnitude greater than Eskom’s current generating capacity of 42 GW.

While the Northern Cape has the highest irradiation in the country, “the lack of water in the Northern Cape is likely to push a large portion of the development into other provinces”, Fluri writes. These provinces include the Free State, the Western Cape and the Eastern Cape.

But what Homer Simpson and Greenpeace need to keep in mind is that concentrated solar power is still expensive, because it is a relatively new technology.

The authors of a Development Southern Africa article, which included Gauché, wrote: “Until sufficient concentrated solar power capacity is installed each year, the localisation potential, and the overall economic benefit for [South Africa], will not materialise. This in turn could stall the technology.”

Conclusion: Doh! Ranking countries according to solar resource does not make sense

Greenpeace Africa’s post on Facebook that South Africa is the “third best solar location globally” is incorrect in a number of ways.

First, the organisation says it was actually referring to the “investment attractiveness” of concentrated solar power technology in South Africa.

(According to Greenpeace Africa the country’s third place ranking was sourced from an Ernst & Young index, but the report they referred to was only published after their Facebook post.)

And since the auditing company does not say how it weighs the different parameters it takes into account or where it collects its data sets from, it is impossible to verify the index’s veracity. Ernst & Young also excludes some of the countries with the highest irradiation levels in the world.

While experts agree that South Africa is one of the countries with the highest irradiation in the world, taking advantage of its solar resource relies on many factors, most notably cost.

The island, which once held the likes of former President Nelson Mandela and struggle stalwarts Walter Sisulu and Ahmed Kathrada, amongst others, will be a pilot

site for the department’s plan to roll out solar power to botanical gardens, South African National Parks and World Heritage sites during the current term of office.

Delivering his department’s Budget Vote Speech on Thursday, Minister Hanekom said the installation of solar power at the island will take place during the current financial year.

“The exciting part of the retrofitting programme is that it contributes towards our countrywide effort to reduce the electricity demand and to start shifting towards efficient energy use and renewable energy use.

“We will be introducing this component of the incentive programme on a pilot basis this year and it will involve the introduction of renewable energy at mainly our botanical gardens, at SA National Parks and at some of our world heritage sites.

“It will also include some of our community-based projects, particularly those that don’t have immediate access to the grid,” he said.

As part of the retrofitting programme, the department will assess the needs of these establishments and then install photovoltaic panels (PV).

“One of the pilot sites will be Robben Island and this will be done this year.

The Minister also said while R180 million will be spent on the Tourism Incentive Programme’s pilot phase, an additional R368 million has been budgeted for the following years.

He said during the 2015/16 financial year, the programme would support tourism enterprises to access new markets by subsidising some of the costs of attending travel shows, as well as costs associated with being graded by the Tourism Grading Council.

Arrivals on the rise, tourism contributes to growth

The Minister said tourism has contributed 9.4% to the country’s gross domestic product over the past year.

He said the sector’s value chain now supported one in every ten jobs in the country.

“The 9.5 million visitors welcomed into South Africa last year contributed to creating a better life for all South Africans.

“The Department of Tourism will leverage the 2015/16 budget of R1.8 billion to create job opportunities and implement programmes that will take the sector forward in an inclusive and sustainable manner,” he said.

The Minister said his department had set an ambitious target of attracting 12 million international tourists arrivals by 2017/18 and increasing domestic holidaymakers from 2.8 million in 2014 to 4.1 million by 2020.

“With this level of growth, the department was on track to achieve the National Development Plan’s target of creating 225 000 jobs within the sector by 2020.

“About 54% of the budget will be allocated to South African Tourism for international and domestic marketing.

“An amount of R100 million has been ring-fenced for domestic marketing this year,” he said