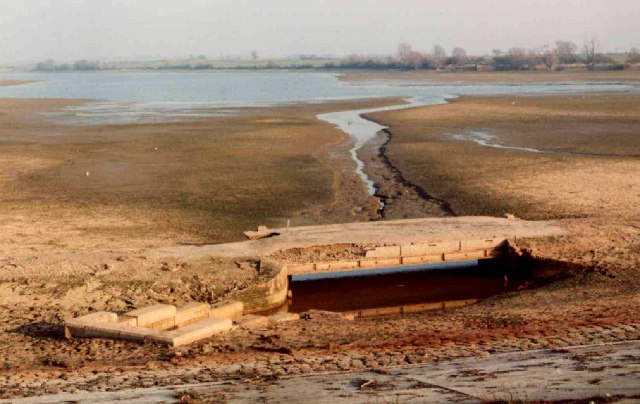 South Africa is facing water shortages after the worst drought since 1992 cut dam levels by 12 percent from a year earlier as most of the country enters its four-month dry season.

Drought in eastern and central South Africa around the turn of the year has slashed corn and sugar output and may trigger water shortages for homes and businesses. Weaker river flow also threatens water quality. South Africa is the 30th-driest nation on Earth, according to the government, which expects water demand to outstrip supply as early as 2025.

“Water will definitely be at a premium over the next few months,” said Sputnik Ratau, a spokesman for the Department of Water Affairs. Toward the end of the dry season “we will be in an even more dire situation in terms of available water.”

The country’s dams are 79.2 percent full this week, down from 90.1 percent a year earlier, according to data on the DWA’s website. Ratau didn’t know the last time dam levels were lower. Of the seven largest dams in South Africa and neighboring Lesotho, which also supplies water to the continent’s second-biggest economy, four have “low” or “moderately low” reserves, DWA data show.

The drought earlier this year was probably caused by El Nino, a global weather pattern that causes dry conditions in sub-Saharan Africa, according to Anthony Turton, a professor at the Centre for Environmental Management at South Africa’s University of the Free State. Water quality may decline as rivers can’t flush away sewage and dilute toxic discharges from mines, he said.

“The balance of probability suggests that we can anticipate a severe drought in the near future,” Turton said in an e-mail. “Water restrictions are likely to be imposed.”

KwaZulu-Natal, home of most of South Africa’s sugar industry and an important tourist destination, is the worst affected province with dam levels down 17.5 percentage points. Reserves in the North West and Free State provinces are 14.6 and 10.7 percentage points lower than last year respectively, DWA figures show.

Average annual rainfall in South Africa is 495 millimeters, less than half the global average of 1,033 millimeters, according to the World Bank. The country also has high evaporation levels due to its warm, sunny climate.

“South Africa is a water-scarce country and we encourage people to conserve water as much as possible,” Ratau said. “The less prudent we are with water, the higher the risk of shortages this year.”