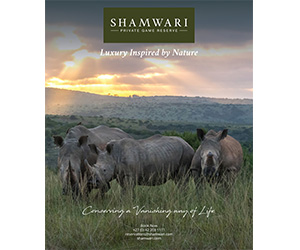 Conservation is expensive and crucial. Capital drawn by South Africa’s wild mysteries and magic, as well as socio-economic development, can fund it.

South Africa faces major challenges and opportunities: to develop an inclusive economy that addresses poverty, unemployment and inequality while preserving the resources that sustain us. We must abdicate our unenviable position as the world leader in youth unemployment, while ensuring that future generations have food-, energy- and water-security.

We must halt and redress the loss of species and natural habitats while embracing the much-vaunted Fourth Industrial Revolution. We must ensure that our economy and our people benefit indefinitely from the natural bounty that makes South Africa a preferred destination for visitors globally. And, of course, we need to provide our citizens with opportunities for dignity and livelihood, and to address issues like land restitution and rural poverty.

At Shamwari Private Game Reserve there are glimpses of how these goals may be achieved; in concert with the magic of Africa’s wildlife and the science that can help sustain it, and with the power of investment.

Humankind’s potential, and our potential as a nation, requires capital. An investment of USD25m by Shamwari’s owners, Investment Corporation Dubai, has funded the refurbishment of Shamwari’s six lodges. Importantly, it also enables the full-time employment of 325 people, mostly from the impoverished surrounding towns of Paterson and Alicedale.

Well-managed conservation is costly, but done well, it’s also pro-poor. A recent independent study by the Terrestrial Ecology Research Unit at the University of Port Elizabeth has found that the economic benefits of conservation outweigh those of agriculture tenfold. But conservation also enables – and needs – the personal growth of those who dedicate their lives to it.

One example is Frans Kgomontsho, who started working at Shamwari as a barman and seized the opportunity to train as a ranger. He is now one of Shamwari’s most sought-after guides. Here we see the meeting of the human spirit, our obligation as the planet’s dominant species to protect it, and our aspirations for fulfilling livelihoods. Kgomontsho’s path is similar to that of Shamwari’s CEO, Joe Cloete, who started working at Shamwari as a trainee ranger in 1992.

Nature, for all its almost magical resilience and ingenuity, is fragile. For example, the red-billed oxpecker poisoned en masse by cattle-dip, was extinct from the area in the Eastern Cape. Shamwari’s first step was to persuade the local farmers to change the dip they used. Next they captured 49 oxpeckers from the Kruger National Park and released them at Shamwari. When the oxpeckers sought out food, the animals panicked at having birds peck at them for the first time, fled in every direction, with the birds in pursuit. The experiment was thought to have failed, but when oxpeckers started appearing with dark bills (juveniles), the conservationists knew the birds were breeding. This a small but significant example of what can be achieved.

Those who care about Africa’s wildlife and about its benefits to its people are enraged by poaching, habitat loss, canned hunting and declining biodiversity. But those fighting to preserve and restore its