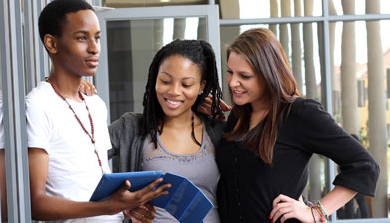 Pietermaritzburg – Two matriculants from the Emafakatini Location near Vulindlela were bursting with excitement yesterday when Msunduzi Mayor Chris Ndlela announced they would receive full bursaries to study at university this year.

The two young women, Thobeka Ngcobo and Nonsikelelo Ngcobo (not related), were among 16 pupils who received full bursaries yesterday at the city hall.

As part of the mayor’s special projects, Ndlela also named 58 pupils whom the council would assist in paying their registration fees. This is the fourth year the mayor’s office has awarded these bursaries.

Thobeka Ngcobo, who received four distinctions in matric last year, said she was one of the first in her family to attend university.

“I never thought I would get this opportunity. It is my dream come true,” she said.

The ecstatic Ngcobo would study for her Bachelor of Commerce degree at the University of KwaZulu-Natal in Westville.

“My results from matric were very good. I received As in mathematics, accounting, Zulu and business economics. I am so grateful for this opportunity,” she said.

Ngcobo said that her parents were very proud of her when they received the news that she would be studying at a tertiary institution.

“We didn’t have the money for my studies. We suffered a little in our lives so I am very grateful for this gift from the mayor and the municipality,” she said.

Nonsikelelo Ngcobo would study for a Bachelor of Education degree at UKZN’s Edgewood campus.

The project by the mayor’s office awarded the bursaries to pupils who hail from disadvantaged backgrounds, whose parents earn less than R1 000 and who excelled at school.

More than R400 000 in bursaries was awarded yesterday.

“We looked at the pupils who did exceptionally well at school, but did not have the funds to further their studies,” she said.

The 74 pupils to benefit were from the Edendale, Vulindlela, Imbali and Azalea areas in Pietermaritzburg.

The pupils would study a range of courses, varying from engineering to teaching, to horticulture.

Ndlela advised the pupils to concentrate on their studies, as this was a “once-in-a-lifetime” opportunity for them.

“Education needs sacrifice and you should pursue your studies. Entertainment can take the back seat until you qualify in your respective fields,” he advised the pupils.

Ndlela told the pupils that they were the “lucky ones” and they should not waste the opportunity.