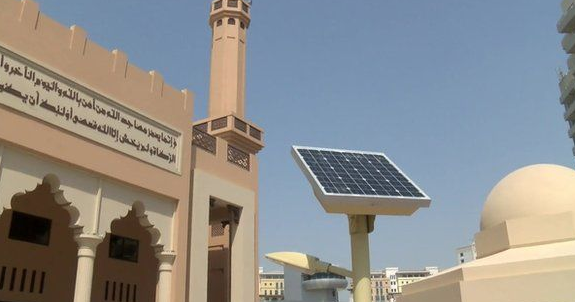 Syed Mohamed Beary of Bearys Group said the important feature of the green building is that its entire energy requirement is met through hybrid renewable energy, both wind and solar.

“At a time when the world is passing through climate change crisis, the mosque demonstrates how sustainable developments can help in mitigating global warming,” he said.

“It is our little contribution in India’s march towards sustainable development,” Syed said, adding that he hopes the mosque will become a holistic place of worship where people from all over the world can come, pray and find true solace.

The mosque, built on 15,000 square feet of area, incorporates greenery in and around. The cooling of the building is achieved by using elements of nature. The building orientation minimizes solar heat gain.

The L-shaped building plan and elevated nature of the prayer hall, green vegetation and water tanks around it offer a naturally cooled environment. The solar heat reflecting terrace floor, laid with white China mosaics and fitted with turbo vents, not only keep the prayer space cool, but also reduces warming of local microclimate, Syed said.

Natural cooling of the building is accentuated by the wind scoop on a 70-foot multifunctional Minaret (from where the Azan, the call for prayer is given), which forces a down draft of cool breezes into the prayer hall and supports the tower structure with the wind turbine mounted atop.

Use of hybrid renewable energy (wind and solar energy) in the mosque will produce more energy than used by the mosque, thus feeding energy to the state grid and accruing energy credits for the next 25 years.

“Reduce-Reuse-Recycle-Regenerate” technology has been implemented with low-flow water fixtures.