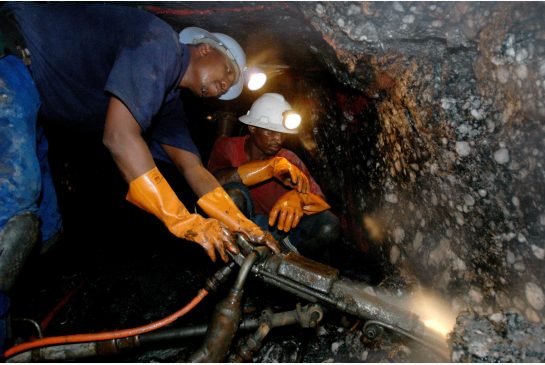 Anglo American has decided to downsize operations across the globe, based on weak commodity prices, declining demand and a sliding rand, meaning that it will contribute towards joblessness. It’s called market discipline, and Anglo’s chief executive, Mark Cutifani urges rivals to do likewise.

Anglo is selling off non-profitable mines but this does not always mean loss-making mines. According to Bench Marks Foundation’s Research study, Policy Gap 7, coping with Unsustainability, and Anglo American Platinum’s (Amplats) June 2013 Interim Report, worker productivity at the Khuseleka and Khomanani platinum mines was 20 percent higher than at its other platinum mines and had doubled its productivity levels. In addition, they had a life span of 20 years. According to Policy Gap 7, “unprofitable” does not mean loss-making but less profit.

The average operating margin for the three biggest platinum producers, Amplats, Impala Platinum and Lonmin, taken together, has been close to 30 percent over 20 years.

Paul Whitburn, at the time, estimated that the “long-term cost of equity” in South Africa is 14 percent. This “cost” is what shareholders demand back in annual returns and it is a world-leading rate of return. According to the International Monetary Fund (IMF) in 2012, South African non-financial returns were “highly profitable”, coming third among 19 developing countries. But for investors, any return of 10 percent or lower against the background of increased worker militancy for a living wage, spells a crisis.

Yet, South Africa has 85 percent of the world’s platinum. During the five-month strike in 2014, the platinum producers were still able to supply the market. And the platinum price remained constant. One would have expected a scarcity of platinum on the market and higher prices. At the same time platinum producers must have saved billions on wages, while workers are going to feel the brunt and suffer as a result of the global slump in demand.

Yet in 2013, Anglo’s draft report titled, ‘Anglo American South Africa – Economic Contribution to South Africa’, in trying to convince stakeholders that it brings enormous benefits to society, states that it employs 82 000 people in all its operations directly and indirectly and contributes towards a further 126 000 jobs. And through what they call ‘induced impact of employee spending’, another 176 000 jobs.

What is obvious is that Anglo have been taking “corrective” measures since the global slump in 2008, and this has gone unnoticed and unchallenged. “Market corrections” as Cutifani calls it, will lead to a further loss of about 10 000 jobs, and if put together with the 42 000 jobs already lost, the impact of this on indirect jobs lost and induced job losses, will have made South Africa significantly poorer. And if each job supports up to 12 or more dependents as claimed by many researchers, the impact of just one job lost is significant.

This is a negative economic impact. It’s worrying as this will further contribute to weakening local demand for goods and services. But more importantly in a fragile country, beset with social unrest, instability and desperation, Cutifani is guilty of exacerbating a huge social problem: that of contributing to deepening unemployment.

If, as the IMF says, South Africa ranks third on productive returns other than financial returns, and job losses are the result of increased productivity, and yet retrenchments still take place, we should all be worried. We are not allowed to question the wisdom of the market. There seem to be rules and dictates that shareholder returns are above question. But that is what we want to challenge.

Henry Ford in 1916 said business could not just be for super profits at the expense of society. He said business had a duty to contribute to society’s development.

He also said: “Business is a service, not a bonanza, and should be run only incidentally to make money.”

Shareholders, the Dodge brothers, took him to court over this. The court ruled that managers and directors have a legal duty to put shareholder interest above all others and had no legal authority to serve any other interest.

Today the principle “the best interest of the corporation principle” stands. This self interest means that multinational corporations are a law unto themselves no matter the negative impacts they may have on society and the environment.

In 2013, a number of chief executives led by Cutifani engaged with the Vatican, and later with the Church of England, as well as the Methodists. Interestingly, the message they received from these visits was to consider the common good and the concept of meaningful existence. But their actions have been exactly the opposite.

When, for example, platinum was reaping in the profits over 20 years, sustainability plans were never made to set up a workers sustainability wage fund, to take care of this valuable layer of workers during bad times. Instead, the dividends were paid out yearly to shareholders.

Before anyone tells me that today the big pension funds representing millions of workers are shareholders too, let me dispel that myth. According to a report on the JSE, workers’ pension funds constitute 10 percent of the funds traded on the exchange. If one divides these returns between hundreds of thousands of workers, it amounts to very little.

Anglo has retrenched over 42 000 platinum workers, and these workers have lost any benefits. That is if the 35 000 subcontracted labour had pension funds in the first place, which is doubtful.

“To stop investing in people in order to gain greater short-term financial gain, is bad business and bad for society.’’

The common good is not served, meaningful existence goes out the window, and winners and losers abound. But for how long? This short-termism, while not considering the value of workers as people with aspirations for a better life but to discard them to the scrapheap, speaks volumes about the kind of world we live in. It also tells us the true nature of big capital.

No wonder we have a messed up society. With corruption, bribery, rampant disregard for people and the environment, as well as the global elites who believe they deserve their ill-gotten gains, what hope do we have.

The same companies who are retrenching workers, talk of stakeholder capitalism and win/win models of operating. Cutifani, brags about market discipline and calls upon his fellow chief executives in mining to follow suit. This is to maintain profits at a certain level. What is right for shareholders comes at the expense of society. This cannot be right and needs to be challenged, as more money moves to the top of the pyramid and less to the bottom where it is needed the most.

During the five-month long platinum strike, the industry more than anyone else, complained, stating that the strike was economic sabotage. Now they happily promote economic sabotage. So what if they have some lean years! They had 20 years of what can be considered super profits and are responsible for this crisis: flooding the market with excess platinum, bad planning and seemingly unable to read the trends. As a result workers suffer. But so do you and me.

Cutifani should have shown leadership: by protecting jobs, developing plans to deal with the slump in commodity prices and by contributing to the National Development Plan and significantly contributing to societal socio-economic development. This fixation of profitability levels at 14 percent returns comes at a heavy price.

Words of wisdom have been given to Anglo. It must use these and turn these into actions. Business must be a service to society and not a law unto itself. Restraints need to be imposed on profits so benefits are more equitably distributed. To do so, will ensure that we will all be better off.