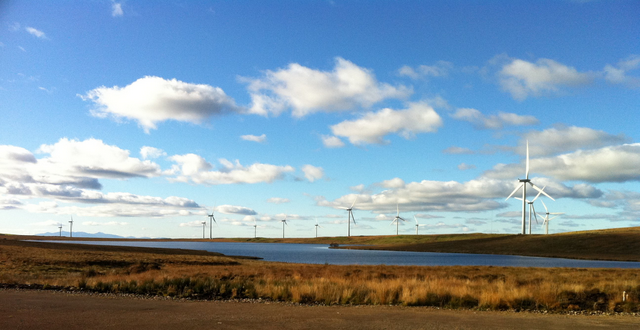 In December last year, one of the largest solar energy plants in Africa was connected to the national grid. The Sishen Solar Energy Facility will have the highest level of electricity output of all the operational photovoltaic plants in Africa — an equivalent of 100,000 households’ consumption.

Despite its size, it took 16 months to build. The cost of the facility is about R2bn — versus an estimated R91bn for an average-sized coal-fired power station.

Clean energy will be used at the plant. According to Acciona Energia, the technology being used at the facility will avoid about 208,000 tonnes of CO² emissions.

The plant came online as the Council for Scientific and Industrial Research (CSIR) released the results of a study into the increasing financial benefit of renewables in SA. It found that energy from SA’s (first window) wind and solar (photovoltaic) projects created R800m more financial benefits to the country than they cost during 2013. This amounted to a financial benefit of R3.7bn in diesel and coal fuel cost savings.

These figures give pause for thought to naysayers who argue that renewables are light years away from achieving the baseload capacity needed. If one considers that these first projects have generated about 3,922MW of renewable power — with an additional 4,000MW expected to go online by the end of the next window, what has been achieved is impressive.

Developing baseload should and does happen incrementally — and over time. Our achievements are all the more impressive if we take into account that this has taken place over a mere two and a half years.

Bloomberg New Energy Finance forecasts that the growing need for power in Africa will see about 1.8GW of renewable energy capacity being commissioned in the region this year — more than the amount that came online during the past 14 years combined.

With or without subsidies or incentives, renewable energy sources retain a competitive advantage over fossil fuel sources.

Over the first three project windows in SA, prices have steadily dropped; with photovoltaic tariffs decreasing by about 68% and wind dropping 42%, in nominal terms. By the fourth window, they are expected to drop even further.

According to the CSIR, the cost per kilowatt hour of renewable energy for new projects is now far less than R1 for solar photovoltaic and 60c-80c for wind projects — thereby “keeping the net financial benefits of renewables positive, even in a future with a less constrained power system”.

Unlike many other countries, there is no policy or regulatory uncertainty. In last year’s state of the nation address, President Jacob Zuma emphasised the importance of a sustainable energy mix.

The Integrated Resource Plan clearly outlines the vision for a sustainable energy mix for SA that includes the use of fossil fuels, renewables, alternative energy and nuclear. It is a vision further supported by the National Development Plan.

In a Guardian Sustainable Business article last year, analysts cited SA as a “good role model on renewables” because of its competitive tendering process that both “align(s) with the long-term goals of government and also creates sustainable jobs locally”.

Although the World Bank has noted that renewable energy projects have resulted in improvement in economic development commitments, particularly as this relates to benefiting rural communities, those responsible in the public sector should ensure that this translates into real benefit for South Africans: both in terms of job creation, as well as localisation. As local renewable energy projects steadily increase their contribution to stabilising the grid, several businesses, among them several JSE-listed firms, are producing their own energy, much of it produced as part of industrial processes, such as sewage processing, sugar refining and paper making.

They are working with us, as the government, as co-generators of energy through the Renewable Energy Independent Power Producers Procurement Programme.

For example, sugar giants Tongaat Hulett and Illovo produce energy from sugar bagasse and trash at their milling plants.

Paper producer Sappi uses pine-tree resin removed before the pulp-and-paper production process to fuel boilers that supply steam to its turbines, enabling the company to meet about 50% of its own energy needs. Companies are able to sell the surplus to Eskom by means of power purchase agreements.

Others are reportedly researching biogas. A local company, Bio2Watt, is already generating energy from methane collected from waste at one of the country’s largest feedlots. These businesses are innovating in response to the collective energy challenges we all face: taking the lead in investing in their own energy in ways that are both cost-effective and green.

Their initiatives should be both welcomed and emulated.

We, as the government, are not far behind. Late last year, Zuma opened Environment House, the Department of Environmental Affairs’s new headquarters.

Not only does the building harness solar energy, it has state-of-the-art water-saving mechanisms, as well as an onsite grey-water treatment works — setting the standard for the type of government buildings that we hope to have in the future.

The Department of Public Works is tasked with the implementation of the government’s Energy Efficiency Programme in all government buildings. This will see, among other things, existing buildings being retrofitted.

Although not all sectors are able to generate their own energy, we are leading by example.

The climate is ripe for this kind of investment. The number of renewable energy investments SA has attracted in the past three years outstrips those undertaken across the entire continent in the past 20 years.

The International Energy Agency predicts the sub-Saharan African economy as a whole could be boosted by as much as 30% by 2040 under certain conditions, namely greater investment in the power sector, more co-operation on cross-border energy projects, and better resource and energy revenue management.

Falling global oil prices should not delay a transition to cleaner energy, by putting low-carbon projects on the back burner in favour of traditional coal-and diesel-powered electricity.

Working with the private sector, we ultimately aim for such innovative renewable energy initiatives to become mainstream — so that they become the norm, as opposed to the exception.

• Molewa is Minister of Environmental Affairs.