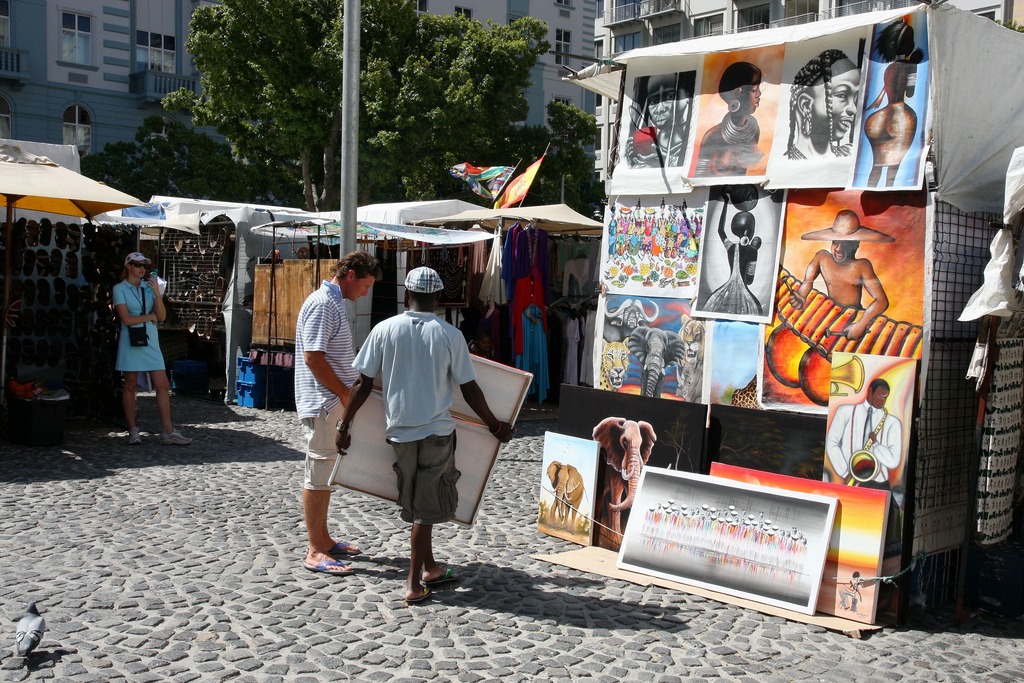 Gavin Ebden and Suraya Theys have both been trading on Cape Town’s Greenmarket Square for more than 20 years. It’s a way of life for both of them, while for Theys it’s also a way to empower other women.

Gavin Ebden strums his guitar in his small Greenmarket Square stall, his long dreadlocks held back by his sunglasses, his face a picture of happiness. Ebden is one of more than 140 traders on Greenmarket Square, which has been part of Cape Town for more than 300 years.

The square has gone through many changes over the decades, and now it has been a successful market for almost 30 years.

Products from Africa including wooden masks, clothing, ornamental ostrich eggs, paintings and jewellery are all for sale, and while everything has a price tag, traders are willing to haggle with buyers.

Ebden has a long association with the square – as a young man he performed here as a member of reggae band Roots Rockers. “We laid our hats on the ground; we were buskers and we made some money, even though it was a parking lot,” he says.

A few years later he returned to the square as a trader, selling African- and Rastafarian-inspired clothing. His stall is on the edge of the square’s trading space. It is a good vantage point as he lures passers-by, potential customers, with his guitar music.

“When I play my guitar it’s an added bit of interest; people stop to listen and then they look at the clothing, and some of them buy something. But some people get irritated,” he says with a laugh.

“I’ve been here for more than 20 years; I’ve seen traders come and go and I’m still here,” he says with a smile.

The 300-year-old square was where a watch-house was built in 1716. The watch-house was the base from where men took it in turns to do nightly patrols across the town. It was also a slave market in its time and, for many years, during summer Cape Town’s main water supply came from a well on the square.

In 1761 the watch house was demolished and the Old Town House was built, from where the city’s fledgling municipality operated. But in 1905 the municipality moved to the City Hall, opposite the Grand Parade.

The Old Town House is now a museum, which houses the Michaelis Collection.

The square was also used to sell fruit and vegetables, but from 1940 it was a parking lot. In 1965, the square’s distinctive cobblestones were laid.

Opposite the Old Town House, Suraya Theys sells a range of clothes, most of them made from bamboo fibre, which she says keeps you warm in winter and cool in summer.

A self-taught designer, Theys has been selling her clothing for 24 years. “It’s hard work. Every day I have to set up and take down a shop; I have to attract customers and make sales,” she says.

“My best seller is the seven-in-one. The garment can be worn in seven different ways, including as a scarf, a top and a cardigan,” Theys says.

In addition to working on the square, Theys is responsible for keeping eight women employed, who come from disadvantaged communities.

“The best part of my busines is that, as a woman, I am creating work for others,” she says.

George Ngigi sells ostrich eggs. Some are brightly painted ornaments, and others are intricately hand-carved and have been transformed into lamps. “I enjoy working on Greenmarket Square; I enjoy speaking to the tourists,” he says.

A trip to Cape Town is not complete without a visit to Greenmarket Square. You will find the square between St George’s Mall and Long Street. Traders set up early morning and work until late afternoon, from Monday to Saturday. Wear comfortable shoes, sunblock and a sun hat. When you are finished shopping head off to one of the restaurants that border the square.