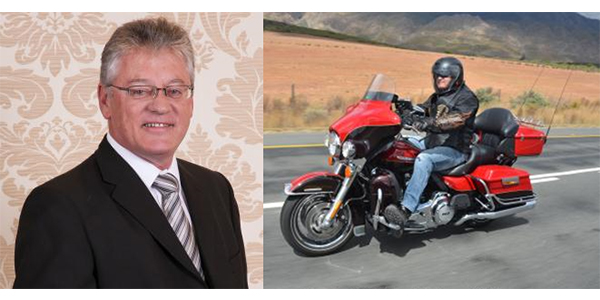 When he isn’t fighting the war on waste or designing waste management infrastructure, the President of the Institute of Waste Management of Southern Africa (IWMSA), Jan Palm, enjoys riding around the country on his Harley Davidson.

Palm is a Civil Engineer by training, but he explains what makes his job slightly different to that of his peers. “Most civil engineers design infrastructure for mankind to live better whereas in waste management we design infrastructure to protect the environment from mankind’s footprint.”

Long before it became ‘trendy’ to recycle and think about one’s environmental impact, Palm saw the need to develop infrastructure to manage waste: “In 1987 I read about the concept of landfills as bioreactors. This sparked my interest and I told my boss that we should explore the field of waste management as a future engineering opportunity.  After some debate, I was allowed to ‘look into it’.”

Palm, who was designing sewage treatment projects for the engineering firm GFJ Inc at the time, certainly ‘looked into it’, and his foresight back then to specialise in this exciting and growing field has paid off.

In 1988 Palm established the Solid Waste Division of GFJ, and later rose to the position of Associate and shareholder before becoming a Regional Director of the company in 1995. The Western Cape offices of GFJ became Entech Consultants in 1996, and he left Entech and formed JPCE in 2003. Throughout his career Palm has specialised in designing engineering infrastructure for waste management.

Amongst the noteworthy projects he has been involved in, Palm mentions the first landfill using geosynthetics for the town of Windhoek in Namibia in the early 1990s. “The Windhoek landfill project was innovative in its design and opened up a whole new field of geosynthetics,” says Palm. He is currently working on a state of the art Waste-to-Energy project for the Drakenstein Municipality in the Western Cape.

Palm says each project has been fascinating in its own way, and adds that he finds great satisfaction in helping clients to reduce the amount of waste that goes to landfills and thereby move up the waste hierarchy. He is also aware of the unique aspects of designing waste management plants in Southern Africa: “We have to ensure that our designs balance out mechanical efficiency with the socio-economic need for jobs,” says Palm.

The biggest change in the field of Waste Management has been surrounding legislation, says Palm. “The changing legislation has opened many opportunities for environmental scientists and engineers to improve the level of design and quality of the infrastructure, leading to reduced risk to the environment.” The problem, however, says Palm is when legislation is not enforced.

Looking ahead Palm explains what worries him about landfills. “I am concerned about the pollution burden that poorly located, poorly designed and poorly managed landfills still place on our environment.” He adds that local political will to resolve these challenges appears to be lacking in many municipalities, and that the cost of legal compliance with norms and standards is often used as an excuse to do nothing.

Despite his concerns, the people in the field of Waste Management give Palm hope for the future. “Their enthusiasm, innovation and drive astonishes me,” he says, adding that he is excited about the innovative approaches being followed to reduce our environmental footprint, making green living more affordable.

While Palm seeks to add value in the industry through the various training courses and networking opportunities offered by the IWMSA, his personal dream is to tour around countries on his Harley Davidson motorbike with his wife. “Having done Route 66 in the USA, other countries that come to mind are New Zealand and Scandinavia,” concludes Palm.